2018 has been particularly busy here. Besides client work, my time has gotten sucked up by more AI courses and a couple of blockchain ones. I started a VR set of classes but just had no time for it.

My social media activity has suffered. I barely look at Twitter nowadays. It’s a function of the people I’m following don’t interest me anymore, or they are sharing articles that 10,000 have retweeted before or regurgitating nonsense from the marketing/advertising/technology echo chamber like it is gospel. Frankly, people who use Twitter mainly for work end up being boring (yes, that is a broad generalization). Not that I blame anyone, I do the same thing. Theoretically, I should prune who I follow and find new people to follow, but that requires effort I’m not willing to commit to. Instead, I created a second Twitter account that is not work focused at all. Not that I tweet much out of there, but it is way more entertaining.

I got rid of my Facebook account a couple of years ago but created another one with my work email address for the sole purpose of scanning the metrics of ads we run for the clients.

I have mixed feelings about Facebook. Everyone I know is majorly invested in Facebook, especially private Facebook Groups. Some publications have set up private groups so subscribers can interact with journalists without being trolled. No other website or platform has successfully duplicated the functionality. On the flip-side, using the same feature to instigate massacres and genocide is unacceptable. Every time Facebook says it took down hundreds of pages/groups run by bad actors, you know there are thousands more they haven’t identified yet. When they say 20 million accounts have been hacked, it’s probably 200 million in reality.

Snapchat…good lord. The UX and ads suck. Advertisers spending on a platform where the most significant demographic has the least amount of money is…bizarre. But I have it because it’s the only way to communicate with younger relatives.

The social app I use the most is Instagram. I think I created my account in 2011. Over the years I had followed so many random people that my feed was sheer garbage. Then layered with the algorithm nonsense, I deleted my account and started a new one. Sure, it’s not a good personal branding strategy, but I don’t care. Life is too short.

Besides, the algorithmic changes, Instagram is such a great place to get a global perspective on all forms of design, from the blandness of neutral colored interior decorating to the vibrant colors of Tokyo streetscapes. Over short periods of time, you can see trends in palettes and styles forming.

Considering what they have seen growing up, it is understandable. Parents and parents of friends probably got let go from jobs, parents probably panicked during the Great Recession, maybe lost homes.

But I think there are more significant structural problems. Historically, males needed to follow the trajectory: get a job, meet a girl, settle down, buy a house and get a mortgage, have kids, buy a bigger house with a bigger mortgage, retire. For food, entertainment and “adult” relations, men had to leave home and go get a job.

The Internet changed all that. Anyone can get cheap food delivery, inexpensive cable/Netflix/Hulu/Prime/ad-supported video, social bonding through planet-scale online gaming, access to infinite adult streaming sites or use Tinder-like apps. Why would anyone want to deal with the corporate world where there is no guarantee of jobs/income and the competition is not local, but global?

Why leave home when you could have all your needs fulfilled relatively cheaply while sitting in your underwear?

Turns out there is data to prove this is happening. From Princeton researchers:

“We estimate that technology growth for recreational computer activities, by increasing the marginal value of leisure, accounts for 23 to 46 percent of the decline in market work for younger men during the 2000s. Based on CPS data, men ages 21-30 reduced their market work hours by 12 percent from 2000 to 2015, whereas the decline was only 8 percent for men ages 31-55. Our estimates suggest that technology growth for computer and gaming leisure can explain as much as three-quarters of that 4 percent greater decline for younger men.”

Causing a 3% decrease in joining the labor pool may not seem like a significant change, but is there any reason that percentage won’t get bigger? Throw in VR for immersive gaming or adult purposes. Why again should males leave home?

On and off I’ve been building an app that does handwriting recognition on the iPhone. It’s ugly as sin and not meant for app stores. It’s my way of keeping up with machine learning and app development.

There are nuances to creating apps, practices specific to platforms, user experience, and the purpose of apps. They tend to be well understood and are not particularly interesting…to me at least.

Machine learning, and of AI in general on the other hand, is like the wild wild west. People are trying lots of things, some of it pointless, some of it plain amazing.

One of the main pain in the butt parts about machine learning is something called hyperparameters. They define how fast to learn and fit the data and describe the structure of components that will do the learning. It’s a bit of art and science. There are general rules, but depending on the data set and what you are modeling, hyperparameters can differ significantly. The hyperparameters for identifying a tumor from a scan will be nothing like predicting stock prices. While selecting hyperparameters is a challenge, another problem is that it can’t be changed mid-stream. You define the hyperparameters and kick off the learning process. Then you wait. There are tools make it easier to identify if the model you designed is starting to work as it learns, but it is still a time sucking process.

Obviously, this is a problem desperately in need of a solution. So researchers and developers have come up with tools called automated machine learning (AutoML). Basically, the tools look at the data, make educated guesses trying to identify relevant data, select a subset of the types of models and hyperparameters to try, and then execute to see which is the most accurate.

Granted, they won’t be super-optimized, but it gets you to 60% incredibly quickly.

I decided to try out one of the AutoML tools. The test was to predict home prices given you already had the selling price for past sold homes and their features like the number of bedrooms, bathrooms, square footage, etc. This is a common practice problem for anyone who has taken a statistics class.

Sidenote: linear regression has been in use since the 50’s. It was time-consuming to do at scale, but the math behind it has been around for a long time. A vast majority of applied AI and machine learning today is regression. If you can logically structure your data in Excel (not necessarily the volume of data), it can probably be solved by some type of regression analysis 75% of the time. What has changed is we have so much more data, and we have access to the hardware that can crunch it all fast. When most new services yap about leveraging newfangled AI, it’s usually regression. Unless they say it isn’t, feel free to roll your eyes at them. I do.

Back to house prices. Here is a screenshot of me testing out AutoML. 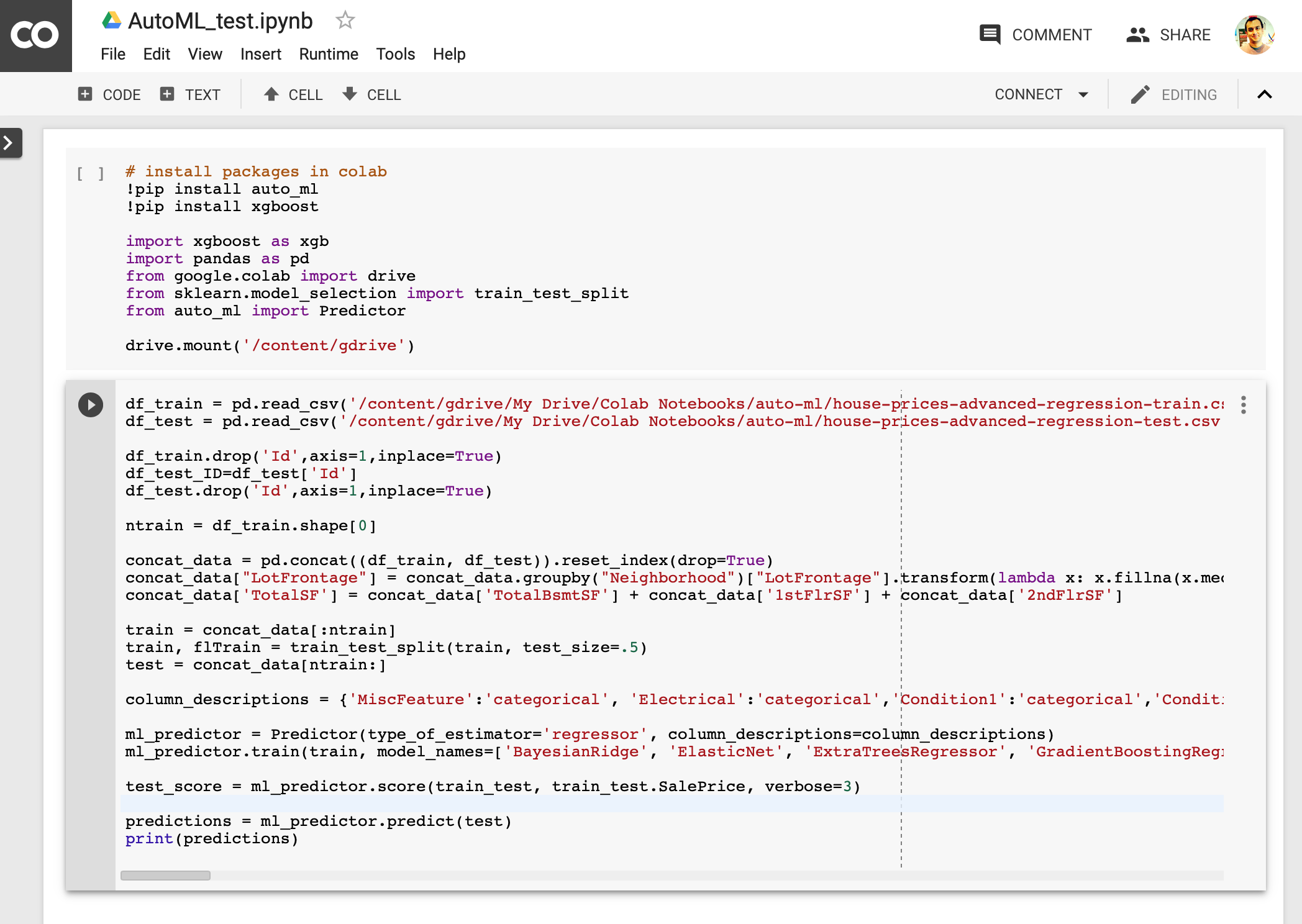 The first 10 lines are for loading libraries needed to crunch the data and loading the data for use. The next 4 is a bit of cleanup of the data (a bit real estate specific). The following 9 lines tell AutoML what type of data I’m providing and what kind of models to test. You don’t even have to give some of that info, it can throw everything but the kitchen sink at it and try to figure it out. The next few lines kick off the training process and make predictions on test data.

In 25 lines of code, you have the starting point for building a robust model.

This test was done on Google Colaboratory, a free tool. Talk about democratizing technology.

What’s the point of all this? We are building technology to solve technology problems. If the technology doesn’t work, we will create another layer of technology that can monitor, fix, and optimize it. What’s one of the value propositions for the cloud? It can auto-scale as needed. Your e-commerce store is getting way more traffic than expected? The software will know to fire up more (virtual) servers automatically and then shut them down when appropriate. Auto-technology isn’t about cars, it’s technology self-serving itself. Like Elon Musk said when building the Gigafactory: “The factory is the machine that builds the machine.”

What happens when all factories autonomously can build factories as needed?

← The Paradox of Choice Bright →